SSC CHSL Admit Card 2019 Of Tier I: Officials of SSC published here the latest CHSL Admit Card news for all the applied candidates. The Aspirants who have applied for this recruitment can download SSC CHSL Hall Ticket 2019 successfully from the official website ssc.nic.in. so applied candidates will download the SSC CHSL  Admit Card which is released by the officials. The ssc.nic.in Admit Card is released in June 2019. so candidates will check them twice after downloading the SSC CHSL Call Letter whether the given details are correct or not. so if they are any misprint details are there in the admit contact officials then they will modify it. So download the SSC CHSL Hall Ticket as early as possible. search for more Latest Govt Jobs here. 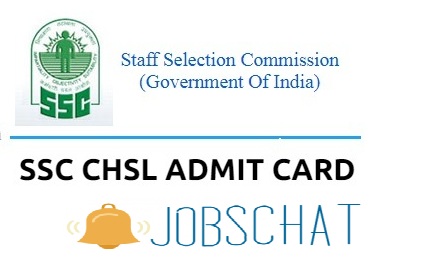 Candidates will get the SSC CHSL Tier I Hall Ticket Online at below. here the link was given to download directly without searching many websites. We are here do not waste your time. The SSC CHSL Hall Ticket Link is to download fastly. This article gives the information to follow some of the steps to download the ssc.nic.in Call Letter on the official website. They will confuse on searching many websites. www.jobschat.in website is created here for the sake of job hunters. So job hunters check it on daily notifications here. And addition to this also carries the ID Card for the exam without any delay to the exam hall. And it should be submitted to the authorities.

Complete information regarding the Organisation issued the admit card and other details is listed clearly in the table on the website also.

Applied candidates may also check the status of the SSC CHSL Hall Ticket Release date also. We all the applied contestants may search for this SSC CBT Admit Card i.e Tier I. But you need to enter correct details for downloading this and to get proper information about the release date. Officials expecting to announce this in June 2019 and arranging the exams on 01st to 26th July 2019. So you have a lot of time to prepare well and crack this vacancy. So all the candidates will start the preparation using the SSC CHSL previous papers we have also uploaded it to our website. not only this all the syllabus pattern, but exam pattern etc also get on our website.

List of Proofs that are necessary for SSC CHSL Tier I Exam:

Candidates Must Need to carry any one of the copy from the following to exam venue along with SSC CHSL Admit Card.