Union Public Service Commission issued the UPSC NDA Notification 2019 For employment of 392 Posts in NDA And NA(1) Category. And Online Applications placed at upsc.gov.in by the Officials and provided the authority for the Unmarried Male Candidates to send their Applications forms for this UPSC NA And NA I 2019 Notification if they possess all the Credentials until 04th February 2019.

Ministry Of Defense in association with the Union Public Service Commission released the UPSC NDA I Notification 2019 on 09th January 2019 regarding the 392 Jobs related to National Defence Academy and Naval Academy. As per the Notification, 50 Jobs are allocated to Naval Academy and remaining 339 Posts for NDA Section. And for this, UPSC Officials informed each and every minute data related to this UPSC NDA & NA I Exam Notification 2019. As most of the Job hunters will search for this on the Internet. But, no one gives you the clear data as like the site www.Jobschat.in. Because to make the Applicants aware regarding this 392 UPSC NDA Notification 2019. And the Candidates simply checking the details simply apply from this page.

Every Year the UPSC only announces this UPSC NDA And NA Notification two times i.e I And II. Likewise, on 09th January 2019, the UPSC NDA Notification I 2019 is liberated out to provide the entry into courses of 142nd NDA and 104th INAC which will commence from 09th January 2019 onwards. Meanwhile, the UPSC Need to receive the Applications from Unmarried Male Candidates till the end date 04th February 2019 in order to find the Eligible ones for the respective courses. All this process will conduct only for the Candidates if they meet the UPSC NDA Exam Eligibility. We also place Syllabus for the Applicants which will help for their Examination. 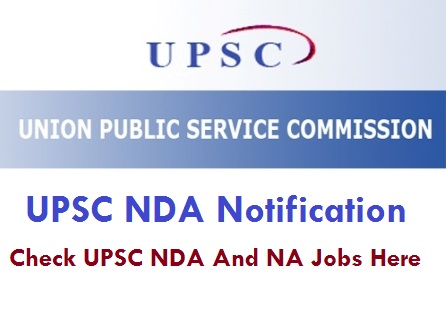 NDA is nothing but National Defense Academy which provides the entry for the Job Hunters into Defense Jobs like Army Jobs, Navy Jobs, and Air Force Jobs through this UPSC NDA Vacancy 2019. So, the ministry of Defense particularly allocated the Entry scheme to UPSC Board. UPSC announce this Twice in a year, providing the opportunity for each Interested ones. But, the Candidate must meet all the Educational and Physical Standards given on the UPSC NDA II Notification 2019. Otherwise, the Applicants application kept out the Recruitment. And no information also will be informed to the Applicants.

UPSC also clearly informed the Posts allocation for each Defense Dept i.e Army, Navy, Air Force in NDA and for 10+2 Entry Scheme for Indian Naval Academy on the UPSC NDA I 2019 Notification. Candidates can get entry into any section only after the examination who cracks the UPSC NDA II Exam. As it is a Central Level Examination, every applicant strives hard for qualifying this and get entry into the Defense Sector for getting training. The Applicants who have doubts can visit the UPSC NDA Notification 2019 once to clarify them.

UPSC NDA And NA I Eligibility

UPSC Board specified the Educational Requirements clearly in the UPSC NDA Notification 2019, and the candidates can check it here also.

Only unmarried male candidates born not earlier than 02nd July 2000 and not later than 1 st July 2003 are eligible for this Union Public Service Commission NDA I Recruitment Notification 2019.

Candidates can pay the Application either in Online or Offline mode in any Bank. For Registration Fee aspirants can check the UPSC NDA II Notification 2019 once.

UPSC Fixes the Online Examination And Interview as the Recruitment Crooks for the Applicants. Aspirants need to clear both the rounds.

UPSC will provide the Salary to the Applicants based on the Rank get by the applicants after qualifying the Selection rounds.

UPSC board finally for the Applicants of UPSC NDA Notification 2019, will conduct the Online Exam as the Recruitment round across various centers in India for admitting the Candidates to Indian Navy, Army and Air Force which are the wings of NDA and INAC Batch. Applicants who received the Admit Cards need to actively take the Exam for getting admission into the 142nd Batch of NDA and 104h Batch of INAC. After the examination, the UPSC Board finalizes the Final Applicants list and make them start the Batch.So, the Contestants must Bookmark our page Jobschat.in for getting intimated about each update about UPSC NDA, NA(I) Exam Notification 2019 which is placed by UPSC. For Shortlisted ones, successful training is provided and then issue a Rank like Major, Captain, Lieutenant etc and based on their Post the Pay Level will alter.

What Are The Registration Steps For UPSC NDA Notification 2019?